Yesterday, December 23, Prime Minister Silveria Jacobs updated Parliament in writing on the postponed decision of the Kingdom Council of Ministers meeting (RMR) regarding liquidity support for the first quarter of 2022. The postponement was confirmed upon request of the governments of St. Maarten, Aruba and Curaçao in instructions to their respective Plenipotentiary Ministers, after the review of the cover letter containing the proposed decision points drafted by the State Secretary. The letter elucidating the conditions gave St. Maarten as well as the other countries valid reasons to consider postponing the agenda point in order to have the opportunity to negotiate better terms.

In customary fashion, the cover letter contained a few December surprises, including the most recent attempt to apply undue pressure on Sint Maarten and the other countries, namely the requested deviation of art 25 Rft, which is regulated by law, and allows for Sint Maarten and the other countries to operate a deficit budget under special circumstances – for which the Cft has already rendered a positive advice. The cover letter further includes passages taken from the not yet adopted Note of Amendment to the draft kingdom law COHO which raises questions of the State Secretary’s intention of bypassing the parliamentary approval. The latter decision points also contained very broad wording that would allow for carte blanche authorities to be ceded.

Considering the points of concern as cited above and taken up in the cover letter to the Kingdom Council of Ministers, St. Maarten, once again, despite working vehemently towards the reforms agreed to and making progress as cited by the State Secretary himself and participating in the legislative trajectory for the COHO Kingdom law, finds itself needing to go back to the negotiation table to get better terms.

Throughout 2021, and most recently on November 26, 2021, the Council of Ministers presented the progress of the implementation of the structural reforms also known as the Country Packages, and St. Maarten has consistently supported execution of many of the proposed reforms taking the local context and vision into account.

Unlike the claims of the State Secretary, political agreement cannot flow naturally after technical agreement when parties are confronted at the last minute with strong arm tactics. Especially regarding a subject matter that the State Secretary knows to be a sensitive subject for St. Maarten.  It is then only fair and reasonable that the State Secretary would allow St. Maarten the necessary time and room to consider the changes thoroughly and gain the necessary support before St. Maarten commits and not try to force the matter through the RMR where there is a clear democratic deficit which always works in his benefit.

It is also unclear why the State Secretary would assume that we would have no qualms with the bypassing of the necessary consensus and legislative procedure and include passages of the Note of Amendment in the cover letter to the RMR. Especially since he was still awaiting political approval from the countries and both technical staff had already indicated and agreed in advance that the actual implementation of the requested financial overviews remained unclear. These types of tactics can easily be perceived as bullying, and an attempt to apply pressure on St. Maarten, Aruba and Curacao.

There was also concern about the wording of a last decision point whereby the smaller countries in the Caribbean conclude that carte blanche authorities were being proposed for further liquidity support, loosely translated: “St. Maarten will also have to adhere to conditions still to be determined…”. While the State Secretary publicly claims that is not the case, the wording of the decision which was also explained to Parliament is too broadly stated, and cannot be disputed as very far reaching with too many unknowns. Such a statement is then binding if approved in the RMR. This was also further elucidated to the State Secretary in the Prime Minister’s response to his letter, including the fact that the Council of State has warned against excessive authorities of the larger country. Such would allow for even more conditionality to be established whereby making it almost impossible for the countries to govern themselves.

Despite the concerns which are rather serious, St. Maarten is committed to working towards the trajectory and continue to participate in the legislative process including active participation in the negotiations regarding the COHO Kingdom Act and the note of Amendment. What we will not stand for and are opposing, which I have expressed in earlier correspondence, is the way in which St. Maarten is treated, whereby “consensus” is forced through pressure and heavy handedness. “This goes against the principles of proper governance and equity within the Kingdom, as well as the promotion of a positive relationship between Kingdom partners. The willingness to help the countries must go deeper than words and should be felt in actions,” Prime Minister Jacobs added.

The Prime Minister in her letter sent to the House of Parliament, updated in writing on the state of events based on her statements provided on Friday, December 13, 2021, and the subsequent press statements and letter from the State Secretary to the Second Chamber. In light of the regrettable, recent postponement of the upcoming IPKO meeting, Prime Minister Jacobs implored the Honorable Members of Parliament to seek other opportunities to raise awareness, dialogue and share information with their colleagues in the Kingdom, on the status of affairs as experienced in the Caribbean allowing them to have the full picture. It is imperative if we are to improve relations in the Kingdom that we must seek ways to decrease the democratic deficit the Caribbean governments are facing when negotiating with our larger Kingdom partner and improve equitable treatment and relations.

As such, being committed to the process, Prime Minister Jacobs concluded that she looks forward to the necessary dialogue taking place after the holidays and into the new year aimed at ensuring that no undue pressure is being exerted on St. Maarten. In the spirit of the season, it is the goal to resolve the pending concerns before decision making in the Kingdom Council of Ministers meeting. Such is the interest of truly assisting the countries to execute the necessary reforms and gain the needed resilience to stand financially and economically strong, and experiencing progress in the best interest of our people. 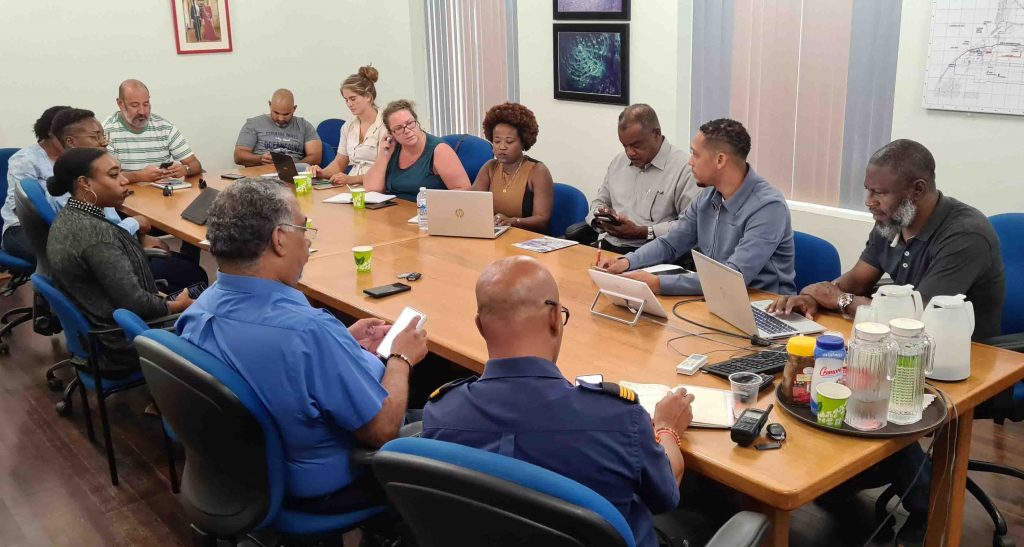